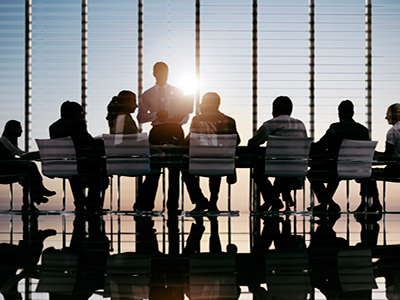 At the technology solutions provider Insight, staff members – no matter their role in the organization – routinely challenge the status quo.

The philosophy comes from the top: Insight CEO Ken Lamneck embraces a behavioral-based leadership development model that emphasizes teammate empowerment, simplicity, communication, and neuroscience. Lamneck shared his perspectives on leadership as part of a plenary session at the 2020 Executive MBA Conference.

“Leadership is such a privilege and what an awesome responsibility it is,” said Lamneck, who shaped much of his servant leadership belief when he served five years in the U.S. Army. He began his civilian career as an IBM engineer and later rose through the ranks at Arrow electronics to become president of Arrow’s Industrial Computer Products business. Before joining Insight in 2010, he directed growth and operations in North America and Latin America for Tech Data Corp.

Lamneck views his role as working for the 11,000 teammates at Insight, instead of the traditional command-and-control leadership style.

“That’s really the essence of leadership – really working for your teammates, really empowering them, giving them the ability, the training, the accountability, the investment to make them as successful and engaged as they can be. And, of course, once you do that, the business takes care of itself.”

His leadership draws from a behavioral-based approach, investing in and championing people to perform their best. To that end, every teammate must understand the company mission, goals, values, financial aims, and leadership commitments.

To create clarity, for example, Insight expects leaders to clearly define the vision, simplify the complex and the ambiguous, and engage in two-way communication. They use tools such as business plans, confirmation briefs, and the rule of seven, which suggests that people need to hear messages seven times before the messages take hold.

Storytelling is one tool that helps inspire people, said Lamneck. “Our responsibility is the what and the why and leading people to the how.”

Lamneck takes leadership development within the company to heart. Insight ties its leadership commitments to performance through a 360-degree feedback system. “One of the most important roles I have is to build leaders. I do that as one of my primary jobs.”

Leaders also must communicate consistently and reinforce the company’s core values of hunger – foster an insatiable desire to work with clients, heart – know it’s all about people – and harmony – work as a team sport. “The key is doing it the same way all the time.”

Effective leadership focuses people on the right actions, he said, producing results that often exceed expectations and help drive the company forward. To make it work, though, leaders need to check their ego at the door.

Find out how the EMBA experience supports your development as a leader, helping you and your organization reach new heights, at EMBA Buzz and follow us on Facebook, Twitter, or LinkedIn.