Robots and Humans: An Uneasy Alliance 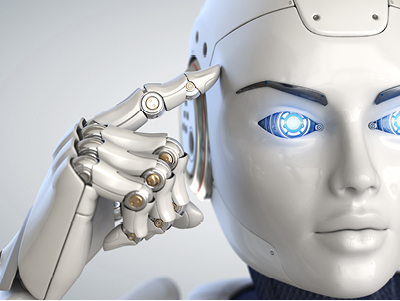 In the near future, when we approach an information desk will we be able to tell whether the person answering our questions is really a person or a robot?

“Someday we may be in a world where we can’t distinguish humans and robots,” says Bernd Schmitt, the Robert D. Calkins Professor of International Business and faculty director of the Center on Global Brand Leadership at Columbia Business School in New York. The center focuses on the interface of brands, innovation, and technology. Recognized for his major contributions to branding and marketing, Schmitt has written nine books and also teaches an international seminar in Munich for Columbia’s EMBA Program.

Are Robots Ready to Work?

As a plenary speaker at the EMBAC Conference, Schmitt shared an overview of the technology transformation to come and presented insights from his research on how robots are perceived.

“We are not standing still,” says Schmitt. Humans continue to evolve, and technology plays an increasing role in that evolution.

Schmitt studies the impact of these robots, particularly in a service environment. Technology already has turned the service market upside down, with the development of the worldwide web, e-commerce, mobile applications, and social media. “The digital revolution is really ongoing.”

Consumer perceptions and behaviors to robot and cyborg technologies will depend, in part, on people’s considerations of human nature and the perceived differences between humans and machines. To date, little research has explored consumer perspectives of these technological innovations that directly impact human nature itself.

As part of the new wave, robots now come in all shapes and sizes. In studying human’s reactions and perceptions to robots, Schmitt discovered some interesting findings. For the most part, humans are comfortable with robots that don’t look like them. The more closely a robot looks like a human – but not exactly like a human – the more uncomfortable humans become. This uncanny valley creates a feeling of unease.

“People generally like it when there is a more human likeness, but when it gets too human but not quite like humans, there is an uncanniness as a result,” he says. Humans then may feel more threatened, possibly in an effort to protect the species and with the belief that our species is superior to other species.

“We somehow believe that our nature is unique one that these machines can never have.”

Robots May Be Coming to Your Store Sooner Than Later

Still robots may be coming to a counter near you sooner than later. The consumer market is the fastest growing segment for robots. In 2017, $5.4 billion was spent on consumer applications. By 2023, that amount is expected to almost triple.

What will that mean to humans? Will they like and accept assistance from robots? And how does this all impact the workforce?

“These are the sorts of questions we are facing as technology becomes increasingly commercialized,” says Schmitt.