How Valuable Are Peer Networks to EMBA Students? 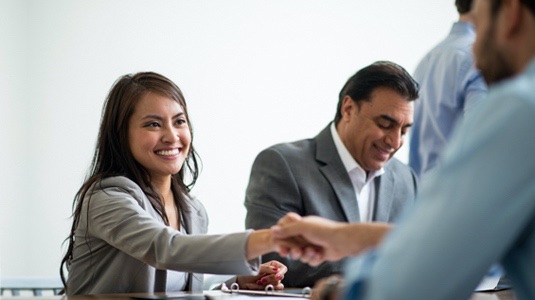 Not an uncommon one, the story goes like this: During a class break, Reid met Bheemsen Athanikar, base accounts growth executive in IBM’s public sector, who mentioned an opening at the company that matched her qualifications. By the end of classes that day, Athanikar interviewed Reid. Three months later she was hired as an account manager for application managed services at IBM.

“There’s a lot of potential and you just really have to put yourself out there, introduce yourself, and find out what people do,” says Reid, who received her MBA in 2015.

Reid is not alone.

Ellen Sanderson, who received her MBA in 2014, learned about an opening in her field — consulting — after it was posted on the Johnson Talent System by Paul Weintraub, principal in Healthcare Transformation Services at Philips Healthcare who also received his MBA in 2014. After interviewing with Weintraub, Philips hired Sanderson as a senior manager for its Clinical and Business Performance Improvement Global Solutions group last October.

“The more you can connect with people who are doing different things and come from diverse backgrounds, the more you stand to gain both professionally and personally,” says Sanderson. “The Cornell network is limitless, and I know that it will continue to expose me to the rest of the world long after I’ve graduated.”

Peer networks also offer a source of employment for entrepreneurs. Consider the case of Chris Lee, president and founder of Sakos Activegear, which sells apparel for wind and water sports.

Graduate of the EMBA Program at Chapman University, Lee found such great value in his peers that he recruited three of them to work in his start-up company.

“Sakos was in the start-up phase when I began the Executive MBA Program,” says Lee. “But one individual can’t grow a company to the level it needs. I recruited three people from the program – all have an entrepreneurial outlook and spirit that benefit the company.”

EMBA Programs throughout the world continue to support networking among peers and alumni. According to the 2014 Membership Program Survey of the Executive MBA Council, almost 95 percent of member programs incorporated an alumni networking event in 2014, compared to 78.1 percent in 2012 and 92 percent in 2013.

“EMBA Programs always have supported peer networking through the cohort model, where students move through the program together; through teams, where students work closely with one another on projects and assignments; and through other activities, social and professional,” says Michael Desiderio, EMBAC executive director.

“In addition, more EMBA Programs are offering ways for students to also meet and form relationships with alumni, which only expands their network and opens news opportunities.”