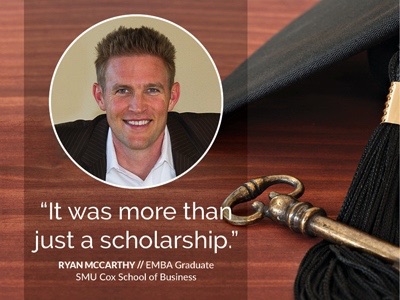 When Ryan McCarthy received the Stacy Heath Memorial Scholarship, the award meant so much more than an avenue to help him pay for his Executive MBA at the Southern Methodist University (SMU) Cox School of Business.

“It really helped me put my whole life in perspective. It was more than just a scholarship,” says McCarthy, president and CEO of AGRO Advisory Group, a sales growth and cost management consulting firm he founded in Dallas, Texas.

The scholarship, given annually to students in their last year, honors Heath and her commitment, loyalty, and belief in the Cox School. It allows recipients like McCarthy to honor those same qualities at graduation —a dream that never came true for Heath.

Heath started the EMBA Program in fall 2008 with plans to graduate in 2010. But inflammatory breast cancer, a rare and very aggressive disease, forced her to drop out of the Cox School. She returned in fall 2010 and planned to graduate with the Class of 2012. Instead, the cancer progressed to Stage 4, forcing her to resign from her studies. Heath died in November 2011, the night before the Cox School planned to give her an honorary certificate of completion.

Tom Perkowski, assistant dean of the SMU EMBA Program, calls Heath one of the program’s most memorable students.

McCarthy, the first student to receive the scholarship in Heath’s honor, calls her “an incredible woman.” The scholarship, he says, is special and is “deep in meaning” to him.

With a strong background in sales, McCarthy pursued his EMBA at Cox because he wanted to learn other aspects of business. He was paying his own way through the program so the scholarship provided very welcome financial support.

“I had such a great experience with SMU,” says McCarthy, who graduated in 2013. “I know that I couldn’t be where I am now without that experience.”

McCarthy now contributes to the scholarship fund, not only in gratitude for the impact of his EMBA education on his career but as a way to pay tribute to Heath. He returns to the Cox School each year for the award presentation. Heath’s husband takes part in the ceremony, which includes a video about Stacy Heath’s story.

McCarthy shares Heath’s passion for the Cox EMBA Program. As part of the program, he and his fellow EMBA students developed a business plan, which served as the basis for his consulting firm.

In addition to receiving the Heath scholarship, McCarthy graduated from Cox as salutatorian with Beta Gamma Sigma honors. He received his bachelor of science degree from Indiana’s Kelley School of Business, where he played men’s tennis and was named an Academic All-American.

Wonder how an EMBA could change your life’s trajectory? Check out EMBA Buzz, the Executive MBA blog for trends, insights and stories for prospective EMBA students.