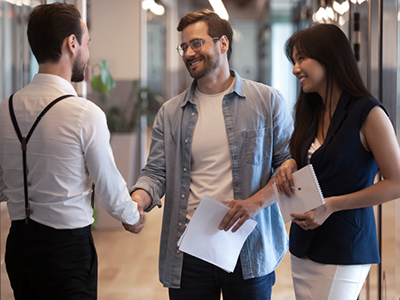 With some five years of experience as an implementation analyst, Erich Gertz started thinking ahead to next steps.

“I wanted to take my career to the next level,” says Gertz, who viewed a return to higher education as way to prepare for greater responsibilities. As he gathered counsel from his mentors, the direction became clear: “They said do it before you are 35.”

Gertz took that advice and entered the Executive MBA for Healthcare Leadership Program at the University of Tennessee Knoxville. As a millennial, he was on the “younger side of the class.

EMBA benefits millennials in many ways

“Most of the folks in the program were more experienced. I was able to lean on them and learn from them. I can call on them even today.”

Gertz expected the program to be challenging and grounded in the real world. Both proved true.

He indeed found many opportunities to apply what he learned to his workplace. For his capstone project, he led a realignment of departments at his-then company, Parallon, part of Hospital Corporation of America.

His time in the program did meet his expectations of career advancement: He soon started a new position as senior operations lead at R1 RCM, a national provider of revenue cycle management services for hospitals, health systems, and physician groups. “I think the degree has moved me along faster in this role than I would have otherwise.”

But the job is just part of the ROI for Gertz, who says he thinks he has tapped only about 30 to 40 percent of the degree’s value to date. His credentials, knowledge and tools, and network will continue to make a difference for him and his career.

That proved true most recently, as he received a promotion at R1 RCM in March and finds himself still making good use of the skills he gained from the program. “Now that I lead a small team and have more interaction with the cost side of the business, I definitely lean on the program’s experience.

“The ongoing value was one of the selling points for me,” he says. “There is a time-release of value—it will stick around for quite a while.”

Never considered an EMBA before? Find out how the EMBA experience prepares you to excel both for the now and for the future at EMBA Buzz and follow us on Facebook, Twitter, or LinkedIn.