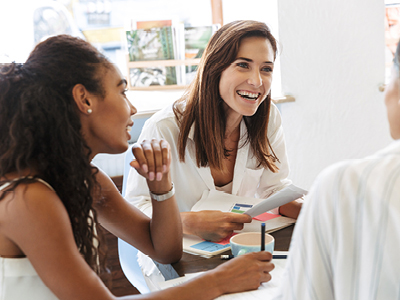 A bit of a doubter at first, Maria Curtis quickly became a convert to the value of her EMBA coaching.

“I honestly was a little skeptical of the coaching experience, only because we wrote journals ahead of time and then discussed the journal topic with our coaches,” says Curtis, talent and development consultant and program manager for senior leader assessment programs at Coca-Cola Company.

“I thought the journals would cause the coaching to feel unauthentic. However, I was pleasantly surprised that it was far from unauthentic, and in fact was the most valuable part of the EMBA Program for me.”

“I had never spent so much time thinking about things like my personal mission statement, or what I really want out of my life. By spending the time to reflect up front and write the journal entries, the coaching discussion was richer.”

She turned to her coach to work on an issue that she had heard from others: They wanted her to share her thoughts and ideas more. She hesitated to do so because her desire for exactness and engineering background made her feel that she shouldn’t contribute if she didn’t know the answers for sure or lacked subject matter expertise. When her coach began asking her questions, she came to a different conclusion.

“I ended up realizing that I don’t need to have all the details in order to come up with a big idea, or to support a colleague who has a great idea. I also learned through our discussion that credentials don’t mean as much as having the courage to make change happen.”

By responding to questions from her coach, she also wanted to change another behavior: Instead of trying to find the drawbacks in a colleague’s idea, she now chooses to seek ways “to make the idea even crazier and build upon it, so I can become part of the change.” As her coach asked her how she could act on her realizations, she remembered a design thinking session she attended.

“In the session, they provided some questions we could use to help build up an idea, questions like ‘How could this idea get me fired?’ They’re intentionally provocative questions to get you thinking outside the box. I have been reflecting on some of those questions from that session when I’m in meetings and I use this technique now to build on others’ ideas versus looking for ways to say ‘that can’t’ or ‘that shouldn’t’ be done.”

Coaching Gains Are Many

Her coach led her to discover her own solutions, an aspect of coaching that Curtis very much appreciates. “I had ‘lightbulb’ moments in every single coaching conversation,” she says. Her coaching experience had so much impact that she would like to one day become a coach for the program.

“Coaching when done correctly is way more valuable then mentoring,” says Curtis. “Mentoring is great, but mentors often give you answers. Coaching forces you to dig deeper and find the answers yourself.”

Curtis counts many gains from her coaching experience: She gained confidence through the program because she was able to practice coaching and giving feedback in a safe environment before trying them at work. She is much more aware of personality and learning style and takes them into account with new teams at work. And a big one: She knows where she wants to go.

“For the first time in my life, because of coaching, I actually have clarity on the direction I want to take with my career.”

Learn more about the ways that EMBA Programs can bolster your ability to lead and excel at EMBA Buzz and follow us on Facebook, Twitter, or LinkedIn.