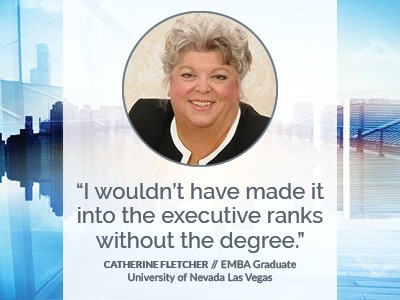 As her retirement date from the FBI grew closer, Catherine Fletcher decided to tackle a new assignment – the Executive MBA (EMBA).

Before joining the FBI in 1987, Fletcher worked for two federal agencies, the U.S. Department of Energy and the Social Security Administration. But the FBI offered her new challenges to overcome. She started there as a financial analyst, when accounting and programming skills were gaining more importance in investigations. She even received several awards for the development of a specialized accounting system that the FBI implemented throughout the organization.

What an EMBA Can Offer

She entered the inaugural EMBA Program at the University of Nevada Las Vegas (UNLV) as a senior manager for the FBI. “I knew I had to have the degree for advancement to higher levels,” she says. “It just fit where I was at the time.”

And the opportunities did come. In 2006, she moved to Washington, D.C., to head a team that developed and established competency models and professional staff career development. She planned to return to her home in Las Vegas within five years, but stayed in Washington, D.C. for 10.

After two years in D.C., she received another assignment as unit chief of the Performance, Recognition, and Awards Unit, where she managed three national programs. A year later, she made another move to manage a program segment for FBI leadership development. Fletcher and her team developed a state-of-the-art learning program for FBI managers that received the FBI Director’s Award for Excellence in Program Management.

In 2011, she entered the senior executive ranks of the FBI as section chief for the Training Division’s Curriculum Management Section with a mission to centralize curriculum development. Her responsibilities included overseeing the development of the Basic Field Training course for new agents and intelligence analyst trainees, which resulted in another excellence award.

Along the way, she relied on the knowledge she gained in the program. “I just learned so much,” she says. “Most of it comes down to building a strategy and executing it – understanding where do we want to be and what needs to happen.”

She retired from the FBI after 25 years of service in 2016, but her EMBA also prepared her for the next chapter. After a long road trip throughout the states with her husband, she returned to Las Vegas ready to launch her own business, Transition Coaching and Consulting.

“I wouldn’t have made it into the executive ranks without the degree,” she says. “It was a very personal journey for me. You just stretch way beyond what you think you can and find yourself at a different level.”