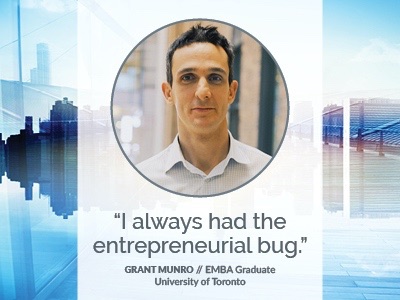 Founder and CEO of FlashStock, Munro didn’t begin his career as an entrepreneur. But his experiences and time in the Global EMBA Program at the University of Toronto led him to start his company, providing digital marketers custom visual content at scale.

Munro received his bachelor’s degree in computer science, but his undergraduate education did not include any business training. He worked for some heavy technical hitters, including Motorola, where he built software systems, and Nokia, where he developed mobile applications. His role at Nokia evolved into global product management and included responsibility for launching new products.

“I didn’t want to stay in the software area as an engineer,” Munro says. He was intrigued by marketing and by entrepreneurship. “I was restless in my role,” he adds. “I always had the entrepreneurial bug and wanted to do a start-up.”

Turning to the EMBA

He applied his technical and business skills to develop software and infrastructure that advanced social media brand marketing for some of the world’s largest companies.

Learning both from his customers and the EMBA Program, he was inspired further to create his own social media marketing company through technology. In 2014, he launched FlashStock to pilot the content platform. “I decided to take the big plunge.”

Growth came quickly for FlashStock after a successful pilot, and by 2017, it attracted the attention of Shutterstock. “The MBA gave me the starting point – the business background and knowledge to make decisions,” he says. “The network was really important as well. I continue to tap that network.”

Munro currently serves as general manager of the custom business unit within Shutterstock, but it is likely that there will be another start-up sometime in his future. His MBA still opens doors for him, too. For example, one of his professors invited him to participate in the Creative Destruction Lab to help other start-ups grow and flourish.

Munro credits a number of factors for the success of his first venture, including education, resilience, and networking. The EMBA experience, though, holds a special place.

“Without it, I definitely don’t think FlashStock would have the outcome that it had.”