EMBA Alumni at Work: Bound for the C-Suite 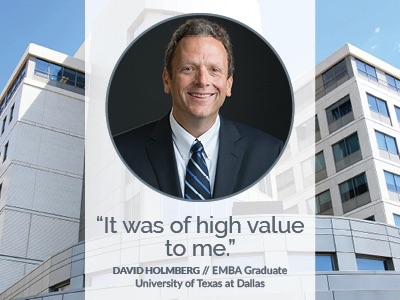 When he entered the EMBA Program at the University of Texas at Dallas (UT-Dallas), David Holmberg was ready to take the next steps.

“I was a senior vice president in a major company at that time, and I wanted more,” he says. “I wanted to continue to grow in my career. I thought I had a shot at becoming a CEO.”

It turns out he had more than a shot: He currently serves as president and chief executive officer of Highmark Health, the second largest integrated health care delivery and financing network in the nation based on revenue. Highmark Health is the parent company of Highmark Inc., which provides health insurance to nearly five million members in Pennsylvania, West Virginia, and Delaware, and dental insurance, vision care, and related health products through a national network of diversified businesses, as well as Allegheny Health Network, an integrated delivery network that includes eight hospitals, more than 2,800 affiliated physicians, and HM Health Solutions.

The EMBA Program offered Holmberg the opportunity to position himself for career advancement.

“Going back for the MBA helped fill the gaps and ultimately it gave me a broad set of skills that I was able to parlay into leadership promotions to the CEO seat,” he says. “It was of high value to me.”

From the Classroom to the Boardroom

During the program while working at the Zales Corporation, he received one of those promotions to lead a Canadian acquisition. His course work quickly paid dividends: He used models and analyses from classes to determine optimal options for export and currency issues.

The EMBA experience also helped him more seamlessly transfer his skills to different companies and eventually from the retail industry to the health care industry. He moved from Zales to become president of Cole Licensed Brands, which included retail optical businesses, and before joining Highmark, he was executive vice president of operations for fabric and craft retailer Jo-Ann Stores.

“Having gone through operations and other courses, it gave me the foundation, the starting point, and I was able to jump into it,” he says.

In 2007, Holmberg joined Highmark Inc., serving in a series of executive positions. Most recently he was president, Diversified Businesses for Highmark Inc., where he was responsible for businesses representing more than $3.5 billion in revenue. He also has served as chief executive officer for HVHC Inc. and chief executive officer and chair for HM Insurance Group, United Concordia Dental, and San Antonio, Texas-based Visionworks.

Now as chief executive officer of Highmark Health and chair of the board of Highmark Inc., the company’s health insurance affiliate, Holmberg still taps the critical thinking and leadership skills the EMBA Program helped him hone.

Holmberg also continues to support EMBA. He has returned to campus as a speaker, and he also recommends the program to others. Highmark has sponsored EMBA candidates with some important criteria: A strong desire and commitment to the program, and a development plan that helps show potential paths to advancement after program completion

Holmberg knows what it takes to reach the EMBA finish line, and he also knows the rewards.

“I would say to me it was priceless,” he says. “In everything I have done since then, I used elements of what I learned in the UT-Dallas program.”

To read more stories about successful EMBA alumni, see them here. Stay up to date on all our posts by following us on Facebook, Twitter, and LinkedIn.